Thread Description
Time to wake up in Galar and save the world of Pokemon! 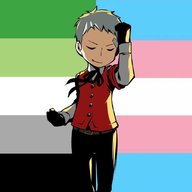 So for the past month and a half, give or take, I have hyperfixated on the Persona series. For those of you who have never heard of it, Persona is a game series where a bunch of teenagers (and a few adults) fight Shadows with what are called Personas to fight against evil and save the world. The details are different in each game (Persona 4 is focused on a murder mystery, Persona 3 focuses on climbing a mysterious tower that appears during the Dark Hour, Persona 2’s plot focuses on rumors coming true, Persona 5 involves stealing the “hearts” of corrupt adults, and Persona 1 is basically “save the town from a bunch of demons that suddenly appeared”), but each game is based on similar ideas, especially the later games.

So naturally, I decided that it’d be really cool to do a Persona themed Nuzlocke run, and I’ve been wanting to do a Personalocke for a while anyway, so yeah! Here we go!


Nuzlocke Rules:
1. If a Pokémon faints, it is considered dead, and must be released/permaboxed.

Cheren Clause: If I lose the first rival battle in any given game, I do not lose the challenge, and I can keep going.

2. I can only catch the first Pokémon on any given route. This part of the challenge doesn’t start until I get my first PokéBalls.

Confusing Routes: Some routes are confusing, so let’s get this out of the way: outside and inside of Pinwheel Forest are two separate areas in Unova. The Trainer’s School grass, the grass around Kukui’s lab, and the rest of what’s considered Route 1 are three different areas for Alola. The Wild Area in Galar is split into the 17 or so different subsections, and they’ll each be treated as separate routes. I’ll probably add a few more routes to this list, but that’s a clarification for those three regions and areas in particular.

Shiny Clause: If I see a shiny, I can catch it and use it, regardless of whether it’s my first encounter or not. I have gotten one shiny in my whole life, so I’m not giving up any shinies I see!

Dupes Clause: I can use dupes if they’re dupes from the current game, but I cannot catch a Pokémon that I have used in one of the previous games/arcs. For example, if I get to Unova, and my first encounter is a Trubbish, but I used a Trubbish in Galar, I cannot catch and use that Trubbish (unless it’s shiny). If I run into a dupe that I used in a previous game/arc, I get an additional three tries to catch a new Pokémon. After that, I don’t get an encounter.

3. Nickname all Pokémon! I’m going to name all of my Pokémon after Persona characters.

Personalocke Challenge by Heyis4Horses:
1. Pokemon have personalities. This is based off of their nature. You cannot have more than 2 Pokemon in your team with the same nature! I.E. Say you have a Brave Turtwig, if the Starly you catch has a Brave nature, it cannot be part of the team, unless the Turtwig passes away. Pokemon that have the same nature would more than likely fight in reality, always trying to outdo one another.

2. You cannot have Pokemon with the opposite nature in the team. With the Brave Turtwig, if the Starly you catch has a Timid nature, these 2 cannot be in the team together. Their natures completely oppose one another, their decisions would be split and there would likely be no coordination in the team. More examples include: Jolly + Quiet. Does not work. (Basically, just look at a nature guide, natures benefit and hinder stats, one always opposes another).

3. Some Pokemon have neutral natures. In the case, you still can't have the same nature Pokemon on the team (cannot have 2 x Serious nature). However, all neutral natures can mix together. You can have a team with all 4 neutral natures, so long as they are all different.

Wake Up, Get Up, Get Out There!: You must fight EVERY GRUNT in EVERY GAME. Someone needs to bring justice to the evildoers!

Pursuing My True Self: You can’t use moves that obscure things or cover them in fog, such as Smoke Screen, Haze, Blizzard, etc. You have to cut through the fog and find the truth!

Burn My Dread: When a Pokémon dies, pick a team member using a dice or RNG. That team member is affected severely by the death, and must lead every battle until either you beat the next gym or another Pokémon dies. You have to face death head on!

Unbreakable Tie: The starter stays in the party until it dies. You can’t kick it out. Friends are forever (or at least, they are until they die)!

Dream of Butterfly: At some point in each run, you should have some sort of flying type in your main party. Preferably a butterfly, but birds and Charizards are fine too.

Maze of Life: Use RNG at the start of the run to choose 4 or 5. You can only have 4 or 5 Pokémon in your party at a time, rather than 6. This is because all of the Persona games limit your party to 4 or 5 people.

Violations of these rules should be fixed ASAP, and if I break a rule, I can only use three Pokémon for the next gym.

Ultimate Challenge:
I will be going through all 8 regions for this challenge, and this challenge will not be considered complete unless I win against the champion in each region. Let’s hope I can pull it off.

Extra Rule: If I fail to complete the challenge four times, I have failed this challenge. This can mean failing four different regions or failing the same region four times. If I fail a region, I can either restart from the beginning or go to the next region and come back later.
Okay, so with that out of the way, here is the order I’ll be doing the games in:
1. Galar/Sword
2. Johto/SoulSilver
3. Kalos/X
4. Sinnoh/Platinum
5. Kanto/Yellow
6. Unova/Black 2
7. Hoenn/Omega Ruby
8. Alola/Ultra Moon

Here’s a folder so people can find where each arc starts:

“Okay, now you’re just sounding like the narrator at the start of a Pokémon Mystery Dungeon game. Just tell me what’s going on!”

I sit up straight, looking around. There’s no anime and video game posters decorating the walls, no plushies, and the room is clean. That’s an obvious bad sign. The only familiar thing I see is my medication - although all of the bottles are fuller than they should be. Well, at least I have that. I reach for the bottles and look at my hand. Pale skin. Okay, that hasn’t changed either. I can see just fine, but I’m not wearing glasses. That’s convenient...

What time is it, actually? It wouldn’t be good to take my medication if it was midnight, after all. Maybe I should get out of here and find a clock. Some water to take my meds with would be good as well.

I walk downstairs and see a phone on the couch. It’s almost 4:00 pm, way too late to take my ADHD medication, but I could probably take my antidepressant...Huh? It looks like there’s a video playing on the phone...a Pokémon exhibition match?

Wait, what? Who’s calling me that? That’s just my online name, at least in some places... I turn around to see Hop, the rival from the Galar games. He’s talking about his brother Leon, I think...

“Anyway, I came over to get you, Vivid! Lee’s coming, and he’s going to bring presents, so make sure you bring your bag! I’ll meet you at my place!”

Hop runs off. I think I saw a bag in my room? Yeah. Let me grab that. I’ll put my medication in there, too. That’ll be helpful. With that out of the way, I should go meet up with Hop.

Hop is just outside my house. “Hah! That bag of yours is so big, I bet we could fit a Snorlax in there! In any case, let’s just go! I’ll race you to my place!”

By the time I get to his house, he’s running out of it again. “Mom said that Lee’s at the station. He’s hopeless with directions...anyway, let’s go meet him there! This is the first time you’ll be meeting my brother, right?”

“I...guess so,” I say. I’ve attempted to play Sword before, but I never finished it.

We run to the station together, and Hop immediately introduces me to Leon.

"Vivid, right? It's nice to meet you. My brother talks about you constantly," he says with a gentle smile.

"Yeah, well, Hop constantly talks about you too. It's nice to meet you," I say.

"Slow down there, Hop. Let's go back to the house, and I'll give you and Vivid your presents there."

The crowd disperses, and I sigh. This is going to be a long day, isn't it?

Oh *shit*. I recognize that voice.

“I am Pharos...It is wonderful to finally meet you,” he says. He swings his legs as he sits on the hill.

“...Hold on. You’re that creepy kid that sneaks into the protagonist’s room in Persona 3,” I say.

“I suppose that’s true, although I don’t know what this ‘Persona 3’ thing that you speak of is.”

“Never mind that, then. What are you doing here? If you haven’t noticed, we’re in the world of Pokémon, not in a Shin Megami Tensei game,” I say.

“I am simply a messenger, here to warn you of what is to come,” he says. He smiles. It’s as creepy as it was in Persona 3, and I ball my left hand into a fist.

“Alright, fine. What’s going on, then? That voice in the white void wasn’t helpful at all, other than saying ‘save everyone’. I mean, I know I have a bit of a hero complex, but even I know that I can’t just save *everyone*, even if I want to,” I say, crossing my arms.

“A voice in the white void?”

“Perhaps. Perhaps not. I wasn’t there to hear it, so I couldn’t tell you.”

“In any case...You, Vivid, have been tasked with saving the world of Pokémon. You must travel to each of the eight regions and complete what is called a ‘Personalocke challenge’ in each.”

“...You’re joking, right? Me, complete a challenge in eight different Pokémon regions when I’ve finished three Pokémon games in total and have never finished a challenge. Of all the people..."

“I believe the details were sent to your phone. Good luck. You’ll need it, dear Vivid.”

Pharos disappears, and I’m left standing there, in the wrong world, frozen, not knowing what to do.

...How the hell am I going to get through this?

“Huh?” I turn around to see Leon staring at me with...concern?

“You looked really spooked. What happened?”

“The pale, ghost-like one? You seemed to know each other.”

“Yeah, and I could kinda hear him too. I don’t know the specifics of a Personalocke, but it’s a type of Nuzlocke, right?”

“Yeah. Not only that, I have to do it eight times over, once for each region."

"Arceus, that some bad luck, kid." Leon looks further down the path. "Maybe we should just go back to my place and talk about this later. Hop's probably freaked out that we're still back here."

"Yeah, that's probably for the best," I say.

With that, the two of us walk back to Hop's house, not speaking the whole way.

I hope y'all enjoy this run! 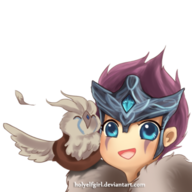