Thread Description
A Deathlocke inspired by my Emerald Nuzlocke Run, now running on HeartGold with even more challenges!! 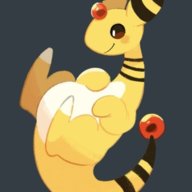 Pokédex Entry
This pokemon is generally energetic by nature and can often be found during the day around other pokemon.

After completing my Emerald Nuzlocke, a friend of mine gave me a dangerous dare... I was warned not to do it...

But, I was never one to back down a challenge.

General Rules:
1. You may only catch the first Pokemon in each new route/area.
2. If a Pokemon faints, it is considered dead and may never be used again.
3. You must nickname all of your Pokemon.
4. Species/Dupes Clause: ON
5. Shiny Clause: ON

Deathlocke Rules:
1. Blackout/whiteout - Your trainer is dead and the game is over.
2. No fleeing wild pokemon or avoiding trainers. You must battle every single one, even if you die.

Former Hoenn Champion, BlueJay, lost everything. Her Pokemon team, her family and friends, and her title that she worked so hard for. But when a stranger arrives, promising a chance to fix everything that went wrong, she decided to risk her life for everything, in hopes to bring back the Sun...