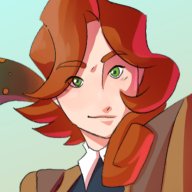 Pokédex Entry
This Pokémon hoards blankets and hides in large piles of them for warmth. If you listen carefully, you can hear it yelling at its own content.

Welcome to the thread! Happy to have you

As you can tell from the title and the graphic above, this is a thread where I mainly just gush about other peoples comics and things I liked in them. Sure, I could do this in the comments of the thread but I feel a little bad putting possibly a whole essay in there, and it would be good to keep these in one place! These are not only for the author, but for others looking to take these sorts of things into account for their own content!

Important note:
This is a thread for analysis, not uninvited critique. Please be kind. Thank you

An Xtraordinary Start
A look at how Xtraordinary starts out strong in terms of the early characterization and development of its protagonist.​
Last edited: Yesterday at 7:39 PM
OP

Pokédex Entry
This Pokémon hoards blankets and hides in large piles of them for warmth. If you listen carefully, you can hear it yelling at its own content.

Hello there! Welcome to my first actual essay on this thread! Hope you enjoy!
​
An Xtraordinary (get it) Start

Completing a nuzlocke is hard, and building a cohesive story around that nuzlocke can be even harder. At the center of your story is your protagonist. For many nuzlockes, this character is your trainer, the possible soon-to-be champion. But actually approaching making this character can be hard, as you've got to build someone from the ground up—as most player characters in these games have very little by way of personality and even backstory aside from 'just moved in'— but also think about how they will grow throughout the story. The protagonist at the start of the Nuzlocke— at the start of any story— is often the epitome of the tarot deck's' The Fool' card:

"The Fool represents new beginnings, having faith in the future, being inexperienced, not knowing what to expect, having beginner's luck, improvisation and believing in the universe."

But why bring all this up? Well, because I think it speaks a lot to the growth of a character, especially the protagonist, in a nuzlocke. A beginning-of-nuzlocke protagonist is not ready to be the champion, but a story will see them work towards the person they need to be to fulfill that role little by little. The sooner this is started, the better, and to grow a character you have to establish who they are at the beginning just as strongly. So with all that out of the way, let's talk about how Xtraordinary by @LintuLady does this with its protagonist, Evelyn, before its first chapter is even done.​ 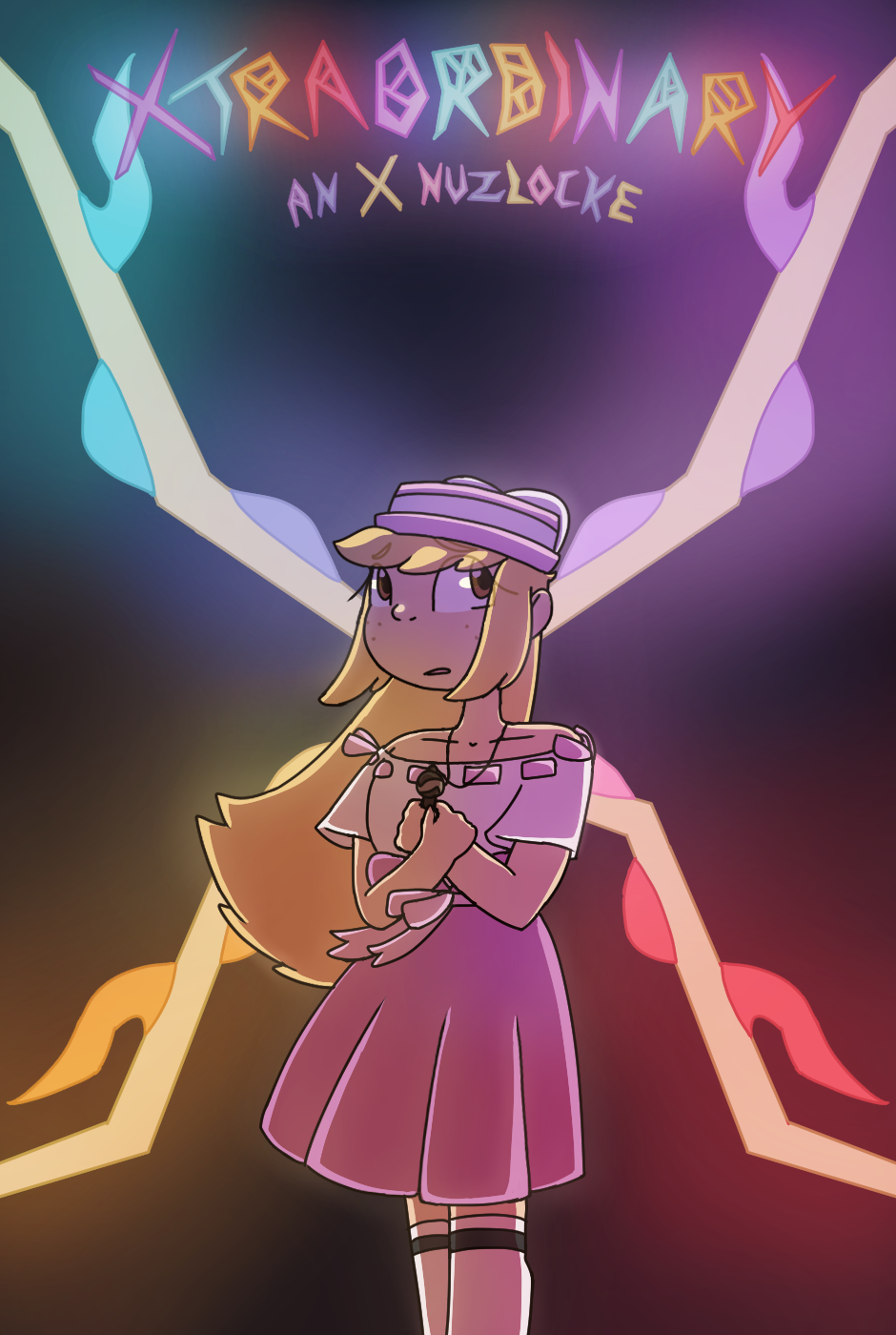 Obviously I will be spoiling much of the first chapter of Xtraordinary, so if you haven't read it yet I would recommend doing that and then coming back ^^~

This is the first page of the comic! We are introduced to Evelyn here, but just as soon as we are introduced to her we are introduced to a kind of conflict: her mother. I would go so far as to say her mother almost stifles her presence on this page, as most of the dialogue in it belongs to her. This page and especially the one after it very quickly establish that Evelyn is a completely different person when her mother is around, with completely different aspirations. A small art detail that I really like here is how Evelyn does nothing but agree with her mother while present, but notice how the expression is always the same. It comes off as repeatedly plastered on, and while this may be a coincidence I definitely think it adds to this. It definitely feels like an expression she's become used to putting on.

In the next page, those differences become even more pronounced. Evelyn's mother is precise and strict and doesn't believe names for Pokémon are necessary, so Evelyn has to only call them their names when she's alone. This touches on another point: Evelyn has been made to be a paranoid person, and she is like this because of her mother. Think about it. Were you ever a child who felt you had to desperately hide something from your parents in the way Evelyn hid that note in the drawer within the first few panels? That often happens when a child doesn't feel safe to show something to their parents, maybe because they know the parents will dislike it. This paranoia also shows here on page 2: 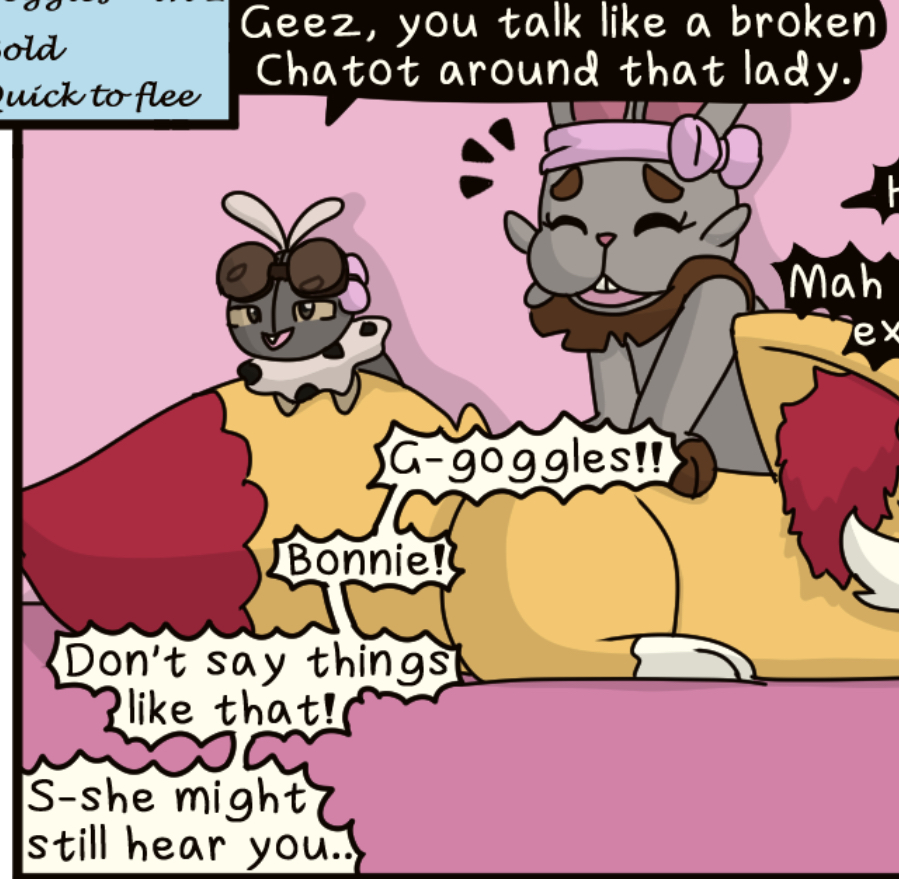 Evelyn, logically, knows that her mom can't actually hear her Pokémon, and her Pokémon are quick to point out the same things yet Evelyn is still afraid and cautious that her mother somehow will hear them. This is a running theme. Evelyn knows there should not be an issue, but constantly doubts herself with a lack of confidence, especially when it relates to her mother. Another spot this is shown is on this same page: 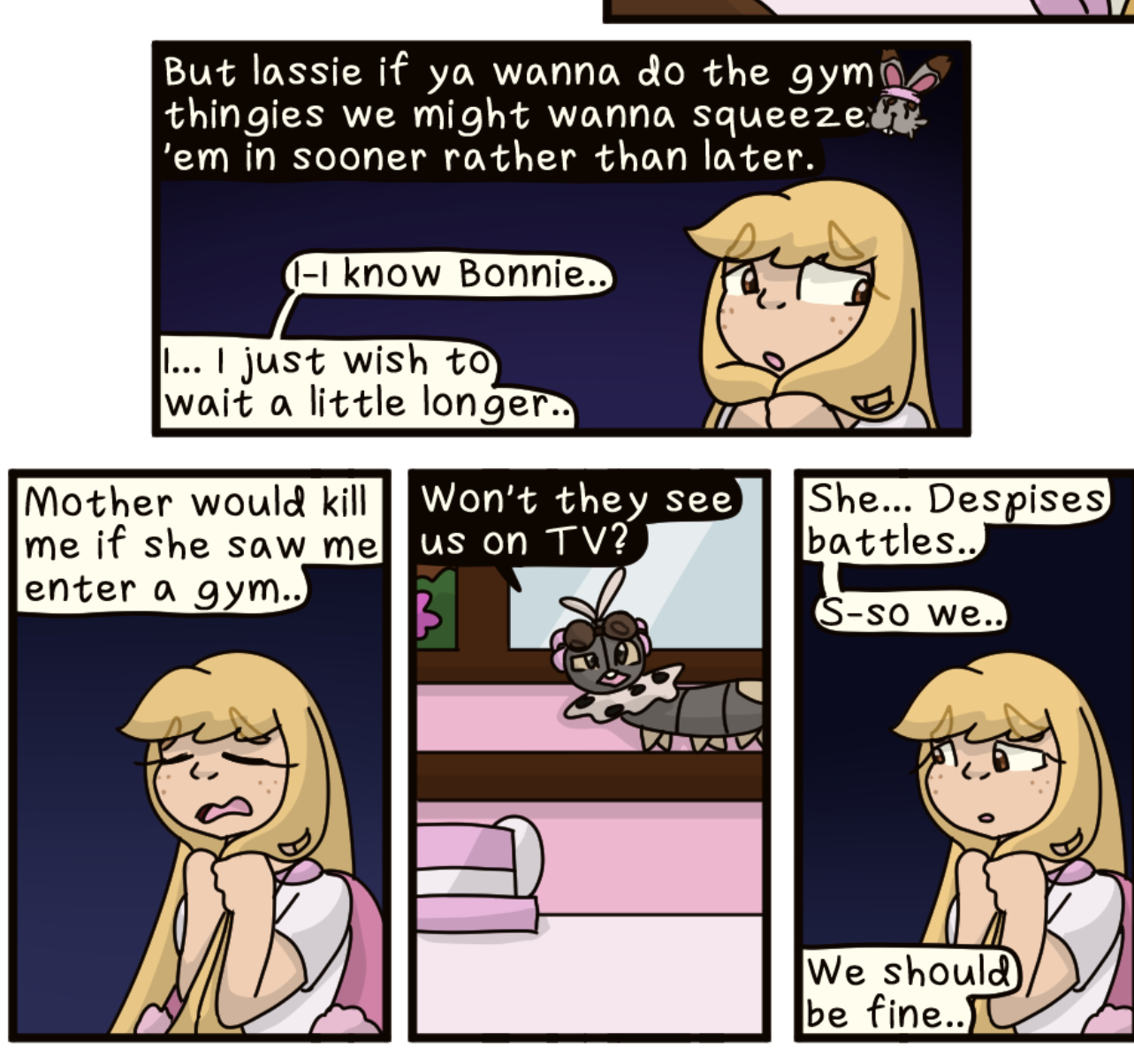 And I guess now is as good a time as any to point out how her Pokémon come into this. Evelyn's Pokémon, especially Goggles and Ruby, are perfect for pushing Evelyn to do the things she has doubts about. They have the confidence that Evelyn sometimes lacks, and therefore the ability to push her to be who she wants to be sometimes, which I think is really good not only to keep the plot moving, but also as part of their character dychonomy. Notice on page 2 how it is Goggles that pushes Evelyn to actually get out of the house and get going. 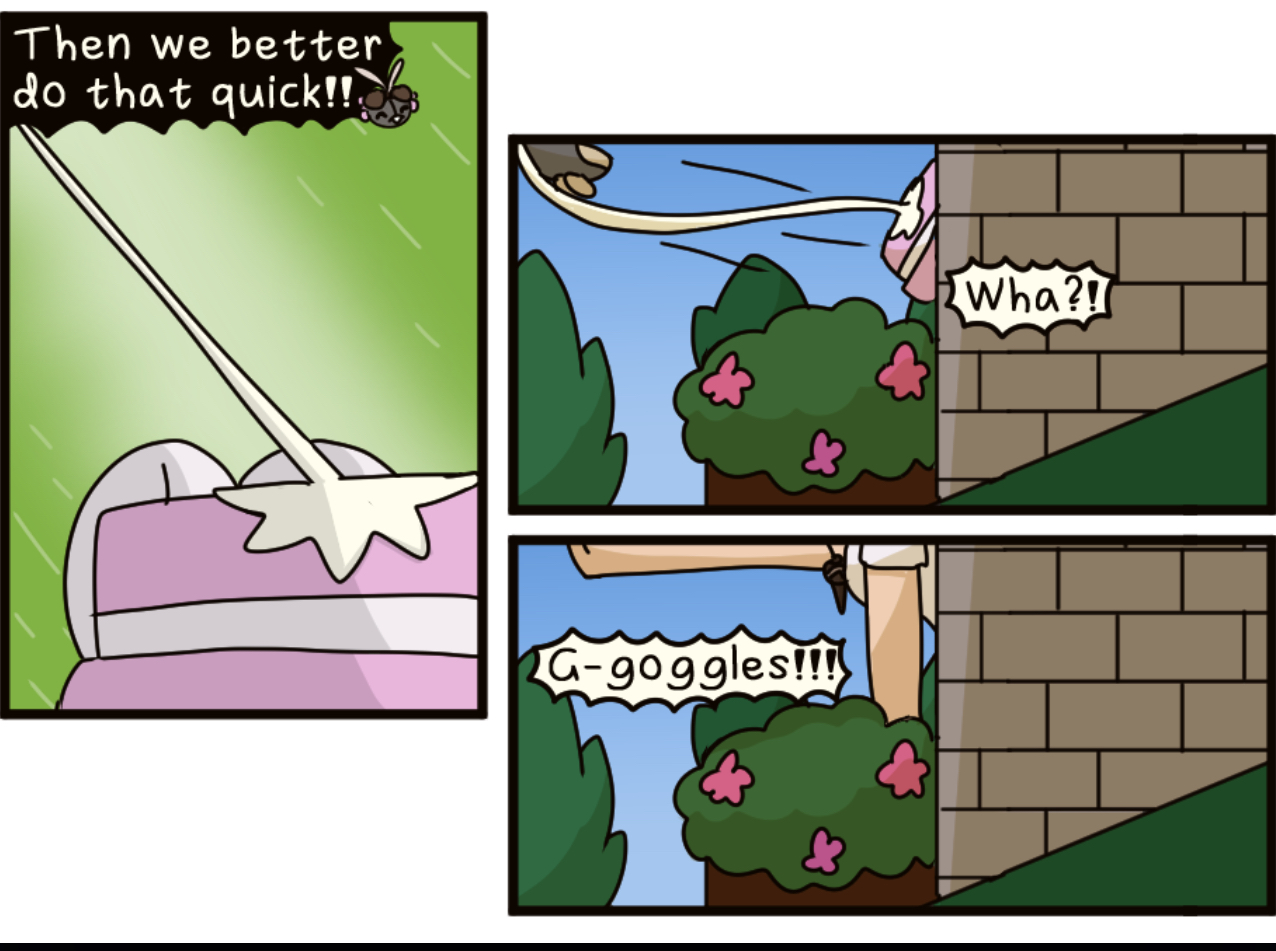 And likewise it is Goggles that inadvertently shows us where some of Evelyn's real priorities lie on page 3: 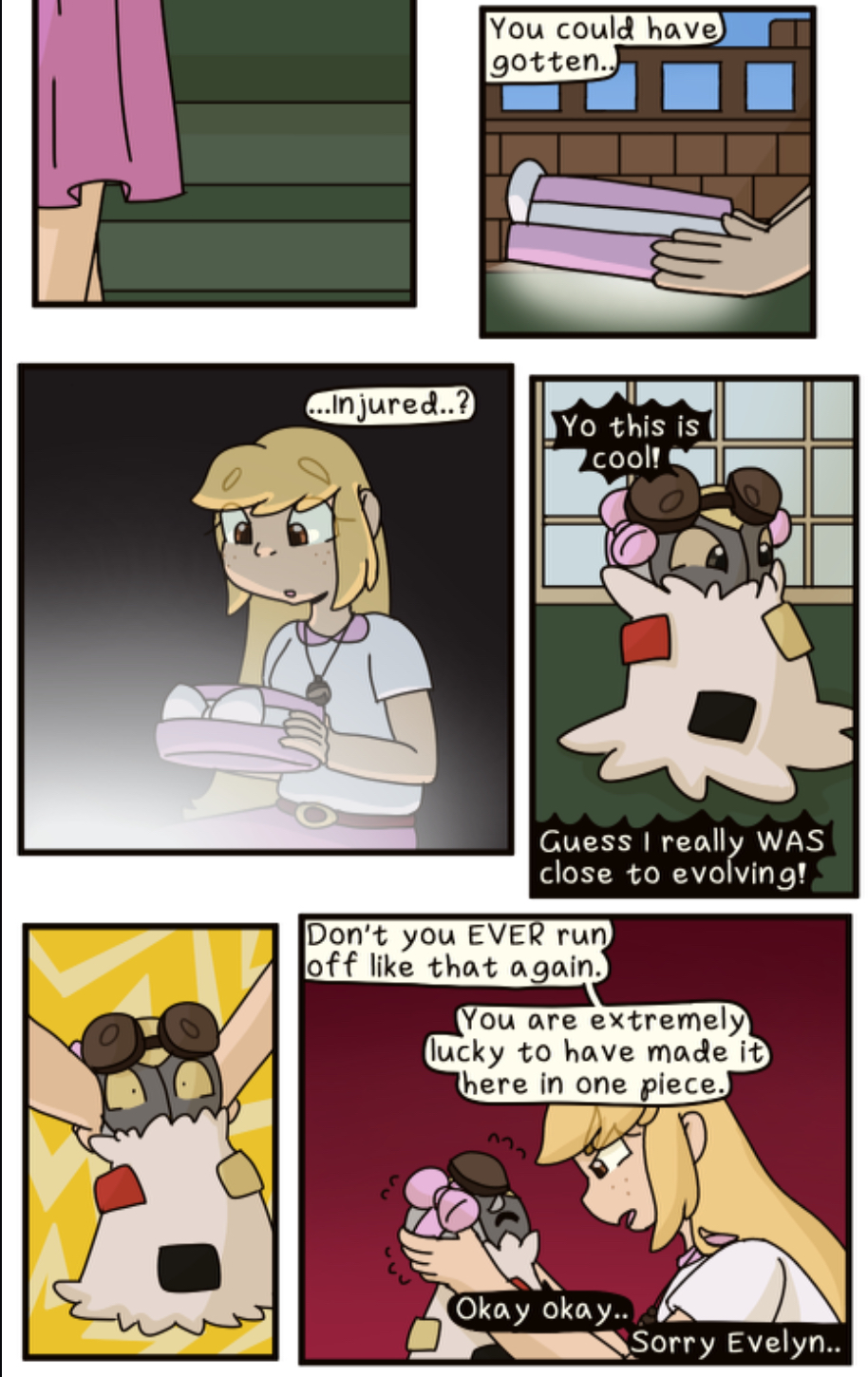 It is clear through this and other pages that what Evelyn cares about, at heart, is the safety of her Pokémon. She is far removed from her mother's opinions on Pokémon since she names them and can talk to them and cares about them enough to get serious in a way we haven't seen her get just yet at this point in the comic. This will become important in a bit. But I also think it's shown in a later page where she over-analyzes her plans for the bug gym. While this could be interpreted as Evelyn being a strategist type of battle, at this point in the comic I interpret it as her wanting to go in with a plan to make sure she not only wins, but her Pokémon come out fine. 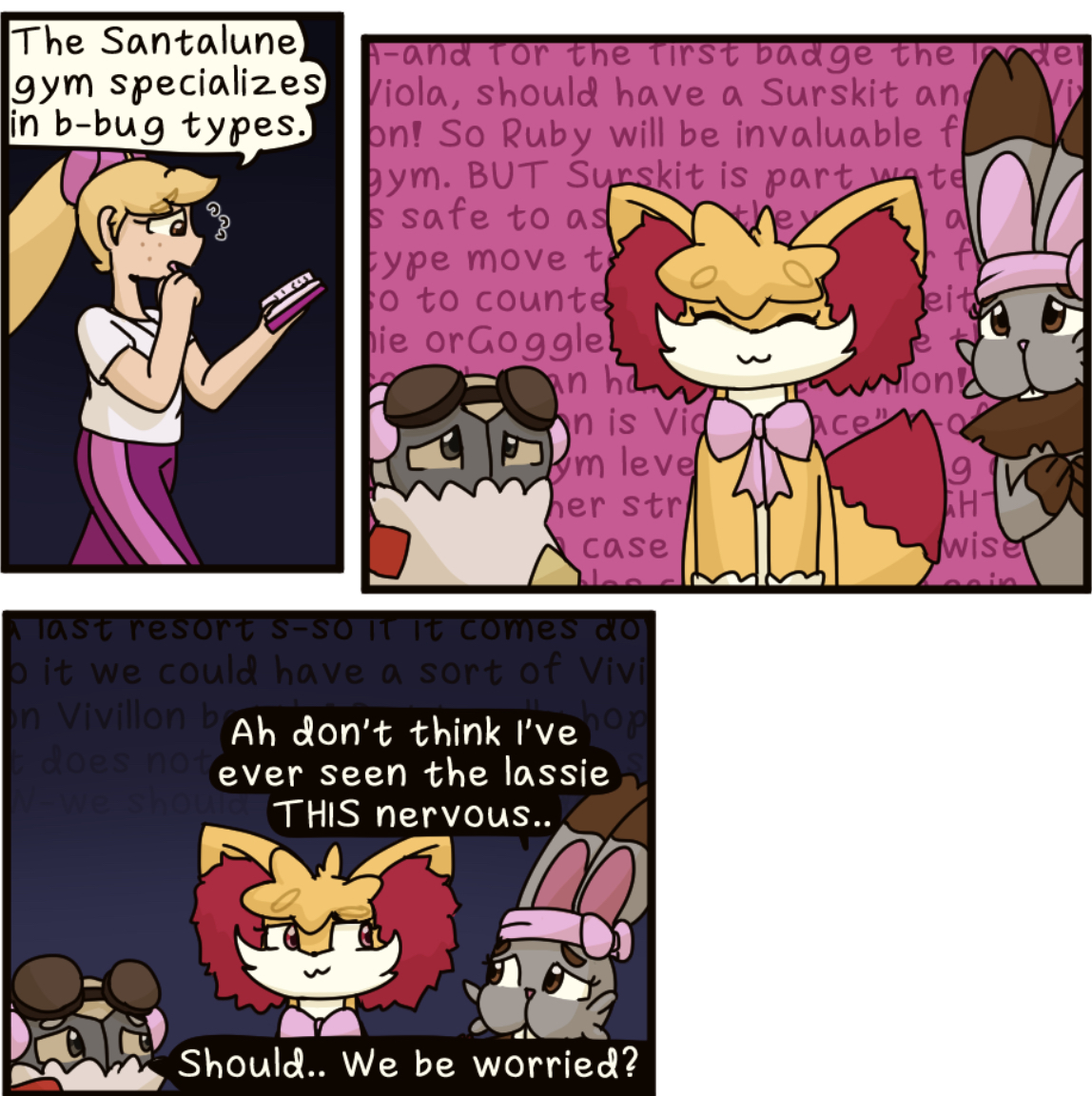 So. To recap. In the first three pages we know all of this about Evelyn:​
THREE PAGES. THAT'S ALL IT TOOK. We have a protagonist who is likable—who we want to see succeed— but has some noticeable flaws to work on. This is some extremely strong characterization from the get-go that is really well done extremely fast. But this comic doesn't stop there. Oh no, no no. It goes ahead and begins to have a bit of change and development within the first chapter's own mini-arc for Evelyn.

You see, flaws are things to be overcome at least partially in terms of characters. In a nuzlocke, a flaw may or may not be something that could prevent the character from becoming champion or doing what they want to do if unaddressed. In this case, that is Evelyn's lack of confidence and especially her relationship with mother. This is mostly because the lack of confidence leads to her falling back on the horrible doubt of ' what if my mother was right?' This chapter addresses that… with the death of Bonnie.

The first death is always the toughest, but for Evelyn in particular who feels herself responsible for her Pokémon and their safety, this is an extremely hard blow. It is one that she does need to take, though, because every trainer has to learn that this will happen sometime or another and every trainer comes to terms with it on their own in terms of not beating themselves down and being consumed by it. Here, Evelyn goes do exactly what everyone fears she might. She doubts herself because of what's happened to Bonnie and begins to believe that her mother was right and that she should not take up training like she wants to— or do anything besides what her mother says she can do— because she could not keep Bonnie safe. She blames herself. 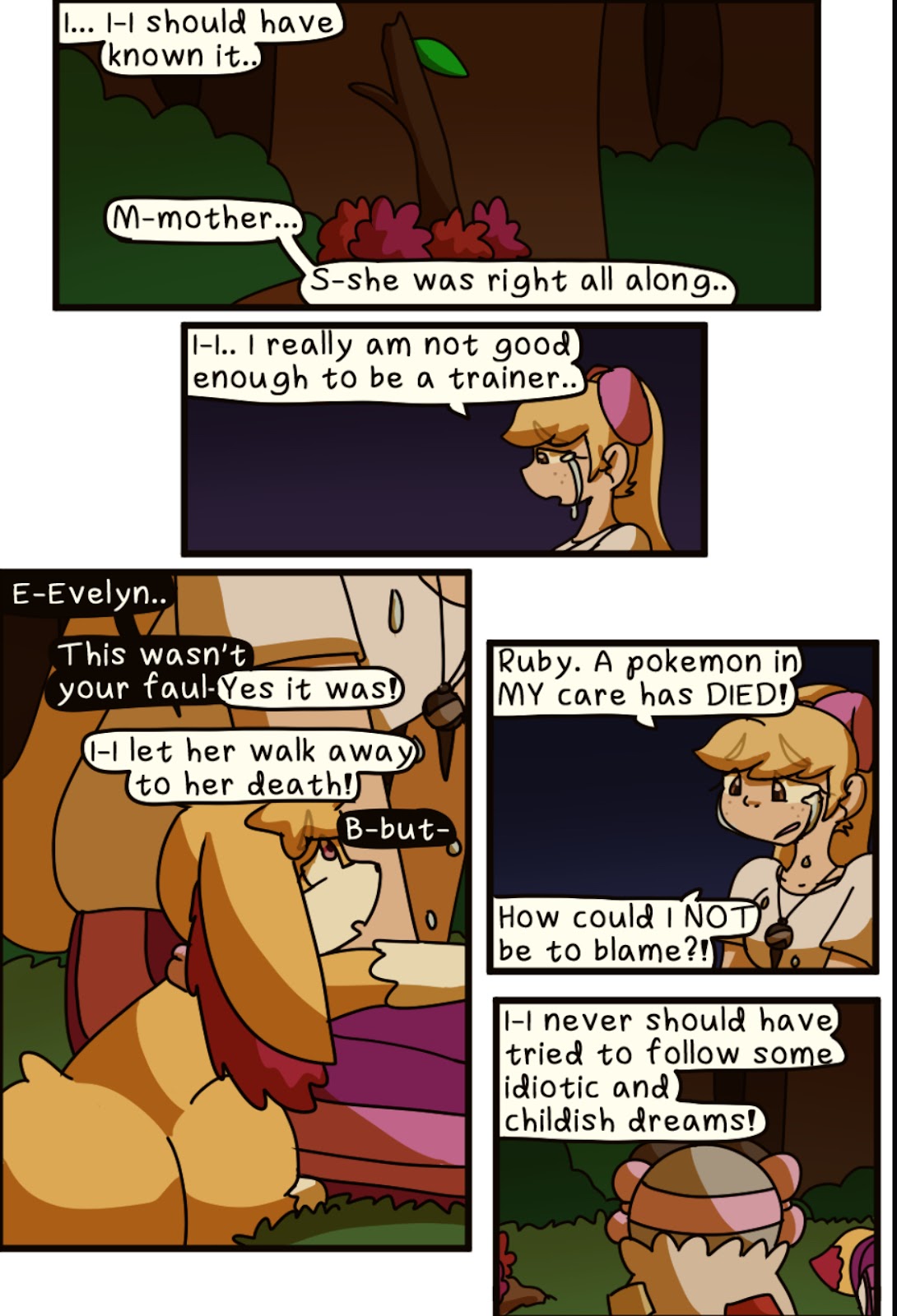 But we also see Goggles once again step into the role of pushing Evelyn forward. They keep Evelyn from spiraling any further down that hole with a stern…well… not quite hand they're a bug- but sh. They're harsh but not incorrect. And it's enough to push Evelyn forward and back out of that hole. While these issues of confidence are not completely resolved because the conversation gets interrupted by the next encounter, it's a good start.

But all of this feels like it plays very well into the end of the chapter, where Evelyn decides to leave a letter to her mom saying that she's leaving since her mother wouldn't approve of what she's doing, and to block her on her phone. Because Evelyn's been through just enough to decide that she can't be in this state where she's got one foot in her home life with her overbearing mother, and the other foot with her dreams, far removed from anything her mom wants for her. She gets the confidence to bite the bullet and just chase after it, a far cry from her behavior in the first page where her Pokémon needed to push her to do that sort of thing. 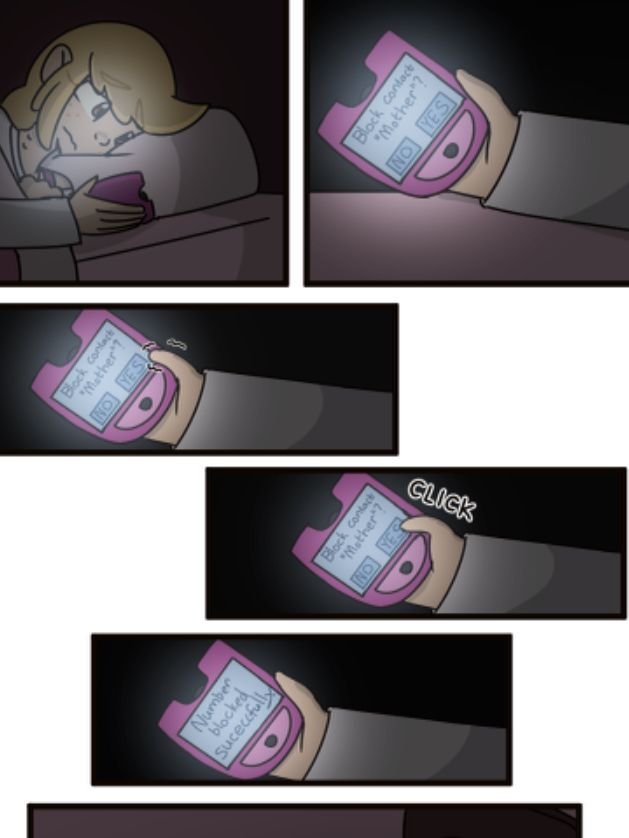 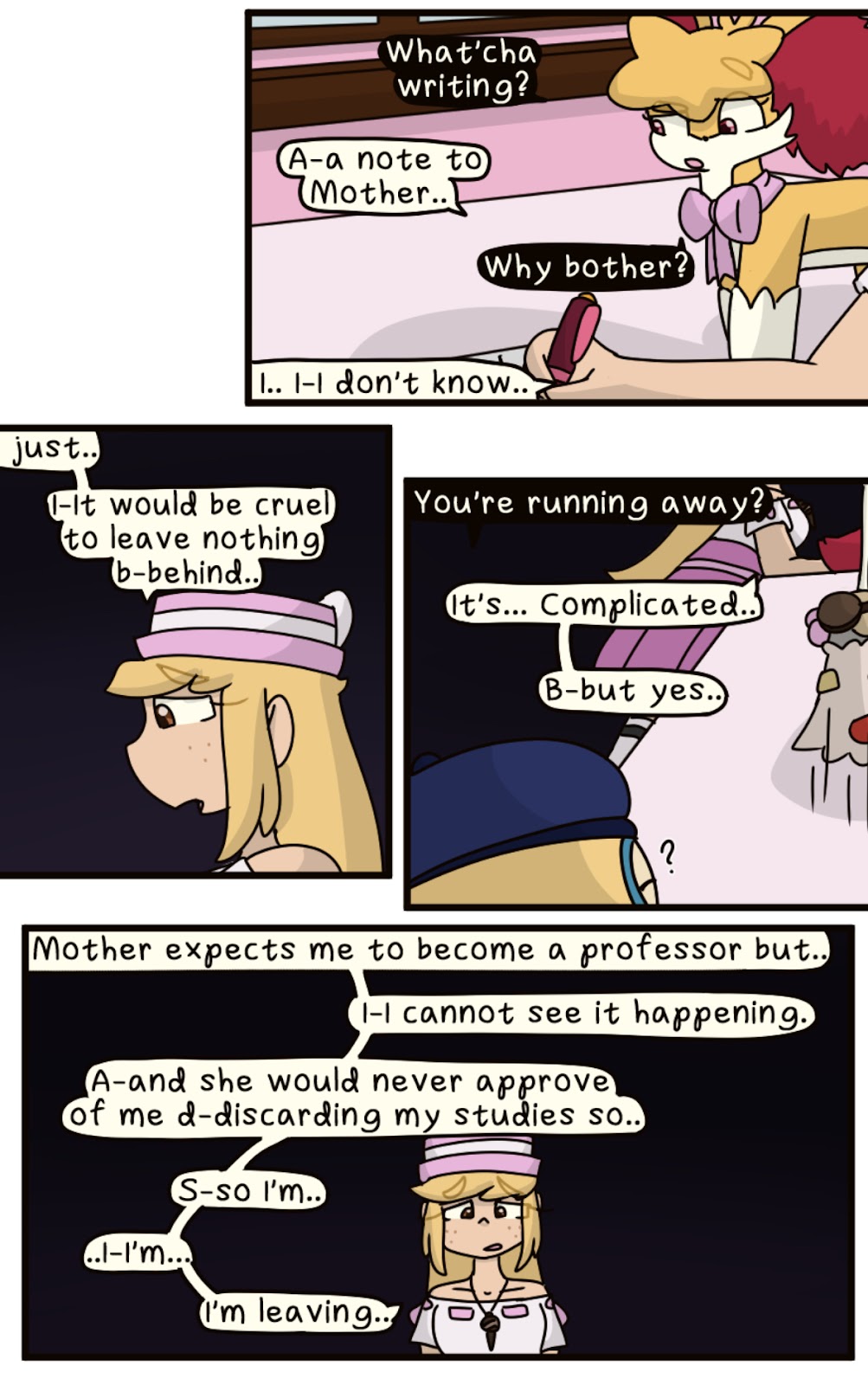 And it's clear these issues aren't cleared up just yet, leaving enough room for even more development as the comic goes on. It doesn't feel too fast or anything thanks to this, it feels just right. 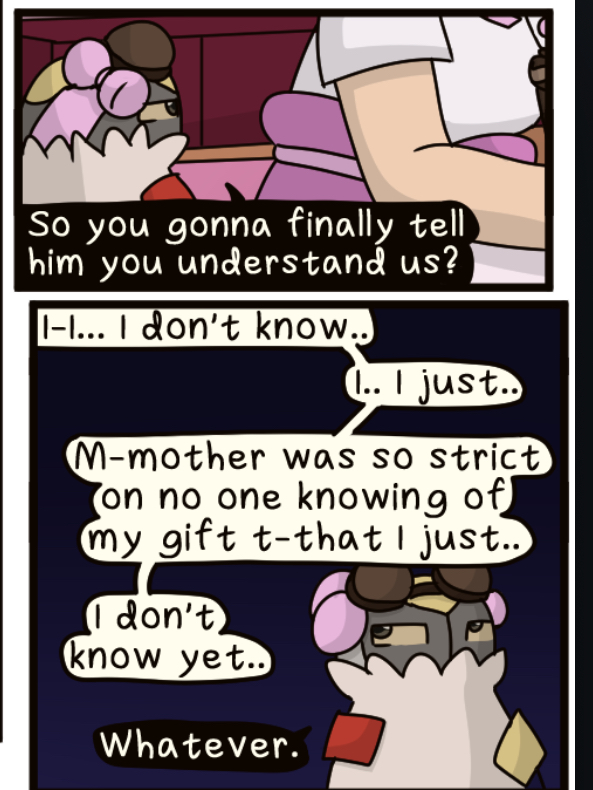 So, while not everything is resolved it feels like there is a very clear arc and progression in this chapter which I find very well done and a really good example of early character development in the main protagonist, and even some really good use of the Pokémon to not only make interesting character dynamics, but also further this development.

I hope this was helpful— or at least nice to read aha! If this all sounds like the makings of a good nuzlocke to you then consider giving Xtraordinary a read

. I obviously think it's off to a really strong start! Until next time 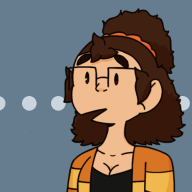 Just a dork who draws

Pokédex Entry
This artistic Pokemon is from up in the North. Loves writing, drawing and all sorts of fantasy. Easily motivated by snacks

AWDUIAWHDIAWO FIRST OFF. I am SO honored that one of my babies is your first target in this AND SECOND OFF OH MY GOD THIS IS SO AMAZINGGGGG YOU ANALYZED EVERYTHING SO WELL IM SO FLATTEREDDDD THANK YOUUUU!!!!!
You must log in or register to reply here.