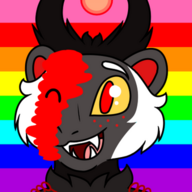 so the title. i love monkeys, they're my favorite animals, i really like monkey pokemon (obviously, given that my sona is an infernape), and i think the infinite monkey theorem is hilarious. it goes that if you have infinite monkeys and give them infinite typewriters, there's a chance that they'll recreate the works of shakespeare. technically there's more to it than that but that's not the point, the point is i love monkeys

why am i calling it this? well, i made a specific ruleset about my encounters and what pokemon i'm allowed to use.

- i can't use A SINGLE POKEMON with a base stat total higher than 475!
- in any given route, if i have an opportunity to catch a pokemon who's final evolution has a BST below 475, i ignore everything else on that route and go for that.
- if there are no pokemon who's final evolutions have a BST below 475 in any given route, i can still catch them, but they'll never be allowed to evolve into their stage(s) with a BST above 475. this includes my starter.
- dupes clause, shiny clause, etc etc
- fainting = death, we know this

okay so i know i have like these other two nuzlockes to work on, and such... how about i start a (semi)blind nuzlocke of black 2 since b2w2 are the only main series games i've never played any iteration of before?

yeah. i think i'm gonna do that.


it's on normal mode, i think?

see but the thing is, i know a bit of what to expect, at least in the earlygame. decided to play as rosa because nate is, in my opinion, the ugliest male protagonist in the main series. named her "nkiruka", it means "the future is greater". "nikki" for short. decided that this was kinda cool so i decided i'd look on behindthename's list of names with african origin for pokemon nicknames. didn't give hugh a special name though because i think "hugh" fits better.

soft resetted for a female starter just because i could and it wouldn't really change anything. her name is achieng, means "born when the sun shines". bold, somewhat vain. has blaze, because she can't have anything else.

first battle with hugh went well! achieng and his oshawott were at a speed tie, so it wasn't guaranteed that either of us would go first, but oshawott went first in the first 2 turns. used tail whip then spammed tackle. achieng didn't even get to red.

went through tutorials and the catching tutorial, got pokeballs, my first encounter on route 19 was a patrat. which is pretty alright! from experience, patrat and watchog are actually really great pokemon to help with catching things! her name is dayo, meaning "joy arrives". careful, often dozes off. has keen eye which isn't necessarily better than illuminate but does have an actual use in battle.

watched alder jump off a cliff, went to route 20 and found a pidove. i've never actually used any of the pidove line (i actually don't like them that much) so this could be interesting. named her abeni, means "we asked for her, we got her". because i'd need a flier eventually. calm, scatters things often. has super luck, which is awesome!!!

went to flocessy ranch! all i knew here is that you could get mareep, and very rarely you had a chance of getting riolu. i got a different dog. i got a lillipup. another girl, somehow. named her etenesh, means "sister". bashful, scatters things often. has vital spirit!! pickup would've been cool, but vital spirit turns into intimidate when she evolves.

got frustration from the neo plasma grunt, grinded for like 2 hours for the cheren fight. got everyone to level 14 because i thought that'd be relatively safe going into this gym battle, since i didn't know what level cheren's pokemon were at, since this is a blind nuzlocke and looking it up would ruin the point. i was right, 14 was safe. dayo took down his patrat pretty easily, and i sent out achieng for his lillipup. i decided to use defense curl so that the boost from work up wouldn't matter, but that probably wasn't the best decision and i just should've attacked. lillipup hit like a truck, and 3 embers only brought it to potion range. whatever, kept spamming ember, won eventually.

went to virbank city, then went to the virbank complex, and found a magnemite!!! i really love magnemite, so this was made me really happy! i named them "madalitso", which means "blessings". quirky, often dozes off, has sturdy. decided to grind to level 20 before the gym fight, since i have EVEN LESS of an idea what roxie's pokemon's levels are like! luckily, i had audinos to systematically wipe out. dayo evolved into watchog, etenesh evolved into herdier, and achieng evolved into pignite. beat some of the workers in inner virbank complex, and am about to challenge roxie.

tl;dr of what happened next: beat roxie pretty easily with madalitso and achieng. did team plasma shenanigans. got to castelia city. caught a grimer (katleho, male) in castelia sewers, caught a cottonee (minenhle, male) in castelia city park, beat burgh, caught a sandile (sauda, female) in desert resort, and caught a gothita (itri, male) on route 5. dayo, abeni, and etenesh were all boxed in favor of these lads. beat elesa (moxie krokorok made it criminally easy), got the zorua from rood (can't nickname him but i'm still calling him "otieno"), replaced sauda with the zorua.

i got bored tho and decided to draw the team (pre-elesa fight) as magical girl-esque gijinkas. i like drawing cool flowy things but honestly feel a little embarrassed that THIS of all things is the first art i post on the nuzlocke forums. i have better examples lol...

oh god i really have to learn how comicfury works...

i finally have a cover for my nuzlocke comic drawn, and a lot of the prologue sketched! i'm really happy about it but also nervous as hell! sucks that i probably won't have any time to work on finishing my ongoing lockes, but that's okay, it's only been like LITERALLY A YEAR since i started the ultra sun nuzlocke! what's another??!?! :'D

one of my best friends jira and i decided to do a platinum soullocke together. she's never played any of the sinnoh games and has very limited nuzlocke experience. this will be fun...

we're both playing female characters. mine's hanae, her's is shari. from "hansha" which means reflection. our rival's name is shatter. we decided we'd name all of our pokemon off of other franchises we like. (i'm not really into a lot of things other than pokemon though so my names are limited to hunter x hunter and skyrim. fun.)

anyway, we actually haven't gotten that far (seriously, we haven't even fought the first trainer yet), so there's not much to read. but still.


we had to spend a bit of time setting up emulators and such, but after we got all that out of the way, we named our characters and rival, changed the text speed to fast as quick as we were physically capable of, etc etc. she decided to choose her starter based off of trainer ID because she didn't know which one she wanted, and she got chimchar. i picked chimchar because... well, duh. my chimchar is male and his name is kite. i planned on the name "kite" because he's the first character we see in hunter x hunter (in the manga anyway! since he's on the cover) and it wouldn't matter what gender this chimchar is, because kite becomes a girl via reincarnation anyway. shatter's piplup refused to keel over and die and jira was not pleased by how much i insulted this penguin.

we were both playing at night, so unfortunately my route 201 catch was a female kricketot named zazan. (jira's was a starly.) zazan got to be in the box permanently because i do not have that kind of patience. my lake verity catch was a female bidoof i named lydia, because haha funny skyrim character. (jira's was also a bidoof who will undoubtedly get more love and adoration because she loves bidoof and bibarel). after lucas's annoying capture tutorial despite me having two more pokemon, i got a female shinx on route 202!!! i named her mjoll! cause, yanno, mjoll the lioness. despite that, shinx-mjoll actually doesn't fit the personality of the character mjoll, like, at all, because her ability is rivalry and her nature is careful. unfortunate. (jira is a lucky bastard who got a shinx with intimidate.)

i grinded up to level 8 and then called it a night. she's currently grinding while i type this.

haven't made any significant progresses on my nuzlockes (cause... busy with my comic, lol) but i did make some progress on the ultra sun nuzlocke (literally all i did was grind a little bit while i was on a plane). i also broke my foot and had surgery two weeks ago to make sure the bone could heal properly, and i start physical therapy in a bit over 3 weeks from now. i don't think there'll be a comic update for dec 19th, ya boy's probably gonna need a nap.

that first sentence was partially a lie, i did make a lot of progress on the platinum soullink, but i'll post about it later.
You must log in or register to reply here.