Thread Description
Or something to that effect, I dunno 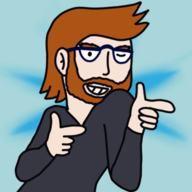 Mostly just using this for posting non comic related projects, or whatever else I feel like.


CURRENT PROJECT​
Currently doing an Inktober Alternate (because I'd rather not support the original creator of Inktober, due to how scummy of a person he is), and using it to create Fakemon.

Despite their outwardly offputting prescense, Toxilopod are often misunderstood, thought to be treacherous, dangerous pokemon. In truth, they are easily frightened, hard of seeing little bundles of toxic fumes, who's gases are so irritating that it evolved to form a partially see through exoskeleton around its face.
So...not sure how I feel about this one. I liked the concept a lot more than the final design came out. I could probably spend a lot more time tweaking it about, workshopping stuff, but I think I wanna save that refining process for after Inktober ends. Cause I still got 30 of these mofos to make.

But, I decided to base this off of the old perception of octopi and squid as these monstrous, dangerous things that lurk in the depths, that are malicious towards people, but in actuality are just intelligent and easily frightened. And cause WWII gas masks are just cool.

Despite its outwardly charming and unassuming look to humans, Vibrily are actually notorious predators in the wild, sitting in wait in beds of flowers for unsuspecting prey to come along. When it gets to close, Vibrily will hop out, using its speed to close in and devour its victims.
I am really proud of how this one came out. The actual concept combined with the full on design meshed perfectly, as I always thought we needed a hummingbird pokemon, but found just making a regular old grass bird would be pretty lackluster. So, instead, have a tiny bird that functions almost like a venus fly trap, but scarier! Fun fact, in my head, this would be like Flabebe, where, depending on what color flowers you find it in, changes the color around its neck and on the flower.

Whilst Rapidashes are considered to be noble, kind pokemon of pure speed, Knightmares are their more devious cousins. Built to withstand and induce terror, Knightmares are known for their run by attacks, battering down weaker pokemon in an area to claim dominion over that territory.
So, woke up late today, so I had a late start. This...was an interesting one. I had a lot of potential ideas for this, and was intially going to do a type of pegasus split evolution from Ponyta. Unfortunately, the idea strayed pretty close to the Galarian Ponyta/Rapidash, so I decided instead a darker version would both set it apart, and fit the halloween theme. And yes, it's a split evolution from Ponyta. Don't ask me how no one's ever discovered it before. The answer is completely unkown. Totally.

SO GUESS WHO HASN'T BEEN POSTING FOR THE PAST FOUR DAYS?

Well it's cause I didn't have much time for a couple days, then had to play catch up. So, enjoy, 4 for the price of 1!

Skimbus, the Fly Fishing Pokemon
Born in the clouds above, Skimbus hop between pond like clouds, people often mistaking them for birds. When enough Skimbus collect in a cloud, it begins to rain.

Muerterrier, the Terror Pokemon
Solitary creatures, the Muerterrier is often mistaken for an apex predator. Due to poor eyesight and large, unwieldy claws that it skitters around on, it is much more capable of giving you a good scare than actually causing harm.

Glowecko, the Bioluminescent Pokemon
Due to the every changing portion of its stomach, travelers often use this pokemon's impeccable memory to figure out their positioning, then having it lead the way. The glow of the Glowecko wanes and grows in tandem with the cycle of the moon, leading ancient cultures to worship it as an oracle of stability.

Glunite, the Ooze Pokemon
Originally thought to be another breed of Geodude, the Glunite are actually the gooey interior, using wayward rocks to form a protective exoskeleton around it.
So, lots of kind of weird ideas here. I'll be honest, days 5-7 I really had...no idea about, going into it. They also went through quite a few design changes. The Muerterrier was originally more of a werewolf, the Glowecko was more storm themed, and the Glunite was...more like Minior?

I dunno, I personally think that Skimbus is one of my better ideas, it really just works. As for the others, I decided to blend a chubacabra with the ring girl, but still give it that big dorky look that made it feel more pokemon, the Glowecko is based on native american designs for its patterns and its general shape, and Glunite I kind of haphazardly threw together because I still don't know if I like it.

(Regional Variant) Crustle, the Stone Home Pokemon
Dwebble who grow up in man made communities have been found to sometimes be drawn towards cemeteries, confused by people's reverence for simple stone sculptures. In hopes to draw those people's attention, they adopt this style of home upon evolution.
So, because Crab + Insect is already a pokemon design, I decided to have a lot of fun with this one. I was originally tempted to do like a steel typing, or maybe a fire one, but ghost seemed to fit the October mood the best.
You must log in or register to reply here.
Share:
Facebook Twitter Reddit Pinterest Tumblr WhatsApp Email Link