Overview Discussion
Well, well, well, Nuzforums, do we have our clocks synced up? Because if you do, you might have noticed the time... Yes indeed, it's feature time once again! And with the recent changes to the Feature Team, what better run to feature than one that mixes things up itself? For my first feature as part of the team, there was one run I just had to spotlight:

Godless Lands by @vizarding​
Arguably the most story-focused games in the main series, the main conflict of Black and White is spurred on as a result of the differences between people and Pokémon, the dynamics at play between the two groups, and whether it's right for them to continue to exist as they have for so long. With so much of the plot being focused on this conflict, and the emphasis put on that story when compared to other entries, it's not easy to imagine them working in a gijinka setting, where the differences between people and Pokémon are much less distinct, assuming both exist at all...

...But if there's one thing I've learned from my time in this community, it's to never underestimate the abilities of the creators here.

In spite of what the title might suggest, the Unova of Godless Lands is anything but. Across the region, Pokémon and their civilizations have flourished under the protection of their deities, granted the Gifts of Power and Growth, and the citizens pay tribute to their gods in turn. Where the games have gyms and send human trainers on a journey to fill the Pokédex and take on the Pokémon League, the world of Godless Lands instead has shrines and sends its gijinka youth on pilgrimages. The eight great shrines define the major pantheon of the region, and Pokémon of age may take up a journey to spread the word of their household's god, honoring them 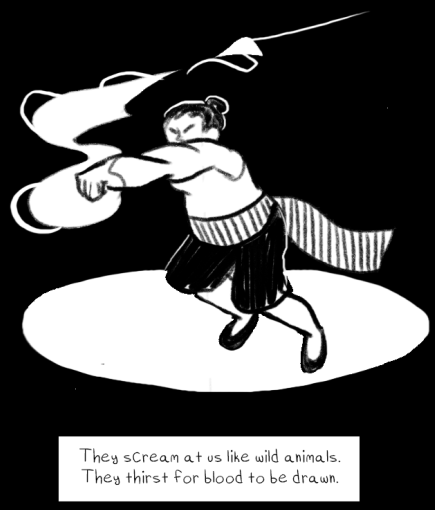 in battle and earning worship and followers in their wake... and perhaps even taking up the role of Champion, overseer of the hierarchy of the shrines and pantheon.

But not all Pokémon in this Unova follow such a path. There are those who forego their worship at the shrines in favor of paying tribute on their own - The titular Godless. And this is where the conflict of the games and the world of Godless Lands collides: Rather than advocating for the freedom of Pokémon and their separation from people, N and Team Plasma act in the name of the Godless of Unova, with the goal of uniting the region and tearing down the walls of its worship, even if it comes at the cost of the pantheon itself.

And so come to our protagonist: Saffron, an Oshawott just of age to begin her pilgrimage... and the daughter of the Priestess of Uriel, Goddess of Death - An all too fitting deity for the hero of a Nuzlocke. In spite of her wishes otherwise, Saffron finds herself traveling Unova in Uriel's name, gathering followers and facing the priests of the shrines so that they may pay tribute to the death goddess. But as she herself states, the journey will not be a bloodless one. Neither worshipers or priests are always merciful, nor are the Godless who join her... And that's not even getting into her conflicts with N and Team Plasma.

But hey, it's not all doom and gloom! Godless Lands has its share of levity, both in the main comic and especially in the extras - There's something beautiful about someone being so bad at taking compliments that she swings directly from "Should you be calling me hot?" to blushing furiously as she backtracks and demands her complimenter, and I quote, "Simp for me!"

With this glorious gang of gals by her side, Saffron may manage to form some real friendships... and perhaps something more.

Perhaps even a purpose that she left on her pilgrimage without. 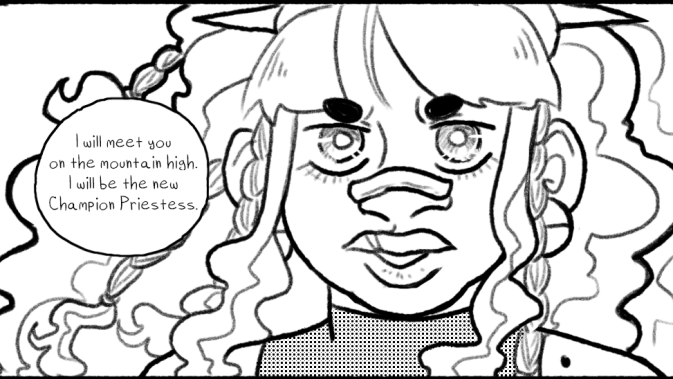 Godless Lands uses a black and white artstyle, which might sound simplistic, but don't let that fool you! The character designs are brilliantly varied and easy to distinguish, and the art is both dynamic and easily readable, whether in terms of character expressions or poses and attacks in the heat of battle - Quite the feat when working with such a limited palette! And it even utilizes techniques like hatching and Ben-Day dots to emphasize shades and textures without sacrificing that two-tone art, which adds so much to it; needless to say, I'm a big fan.

And when it comes to story? Godless Lands is a journey in its own right, from quiet and somber moments to intense, action-packed battles, and from jubilant excitement to deep pain and sorrow over what the group's pilgrimage has cost them. (Not to mention a healthy dose of nightmare fuel.) 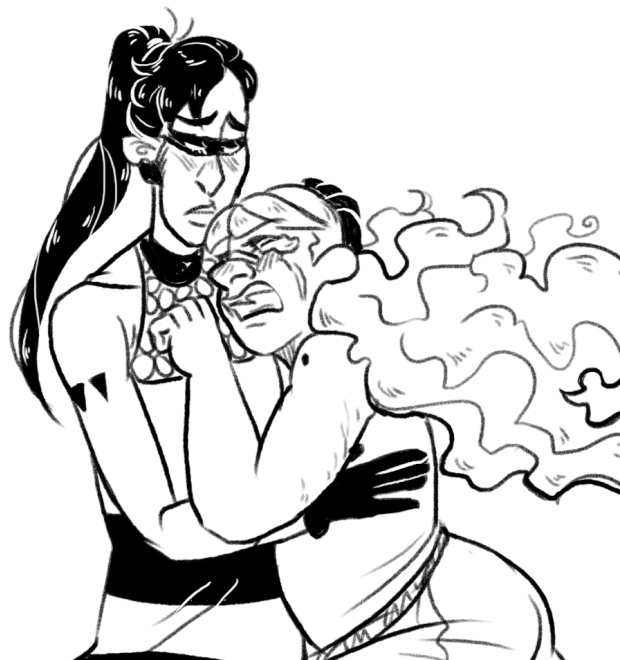 While going back through the archives, I was particularly struck by Saffron's struggles with death, and her connection to it as a pilgrim of its goddess and daughter of its priestess - Namely, her difficulty emoting and expressing herself in the wake of losing one of her companions, and her finally breaking down while she speaks with another of her friends about her experiences. I may be biased as someone who struggles with emotional dysregulation, and whose struggles manifest in ways similar to Saffron's when it comes to dealing with death, but that moment is one too powerful for me to not make note of here.

I could keep going for ages about this comic, honestly - I haven't even mentioned that one of the Pokémon who joins Saffron in her pilgrimage is disabled, with prosthetic limbs, whose status as a disabled person and use of these mobility aids ties into her story and personal goals without being the entire focus of her character, for instance! Or the fact that there's some lovely polyamorous representation among the team... But everyone on the forums is busy with their own lives, and I've already spoken about this run for a good thousand-ish words. So instead, I'll end with this:

Godless Lands is a brilliant story that manages to weave the original plot and setting of Pokémon White with its own twists on the setting and characters in a way that feels incredibly natural. With both strong writing and strong art backing up its concepts, I couldn't recommend it more. If you have an interest in Nuzlockes that are distinct from their source material but still recognizable, and you haven't read Godless Lands? Well, what are you waiting for? 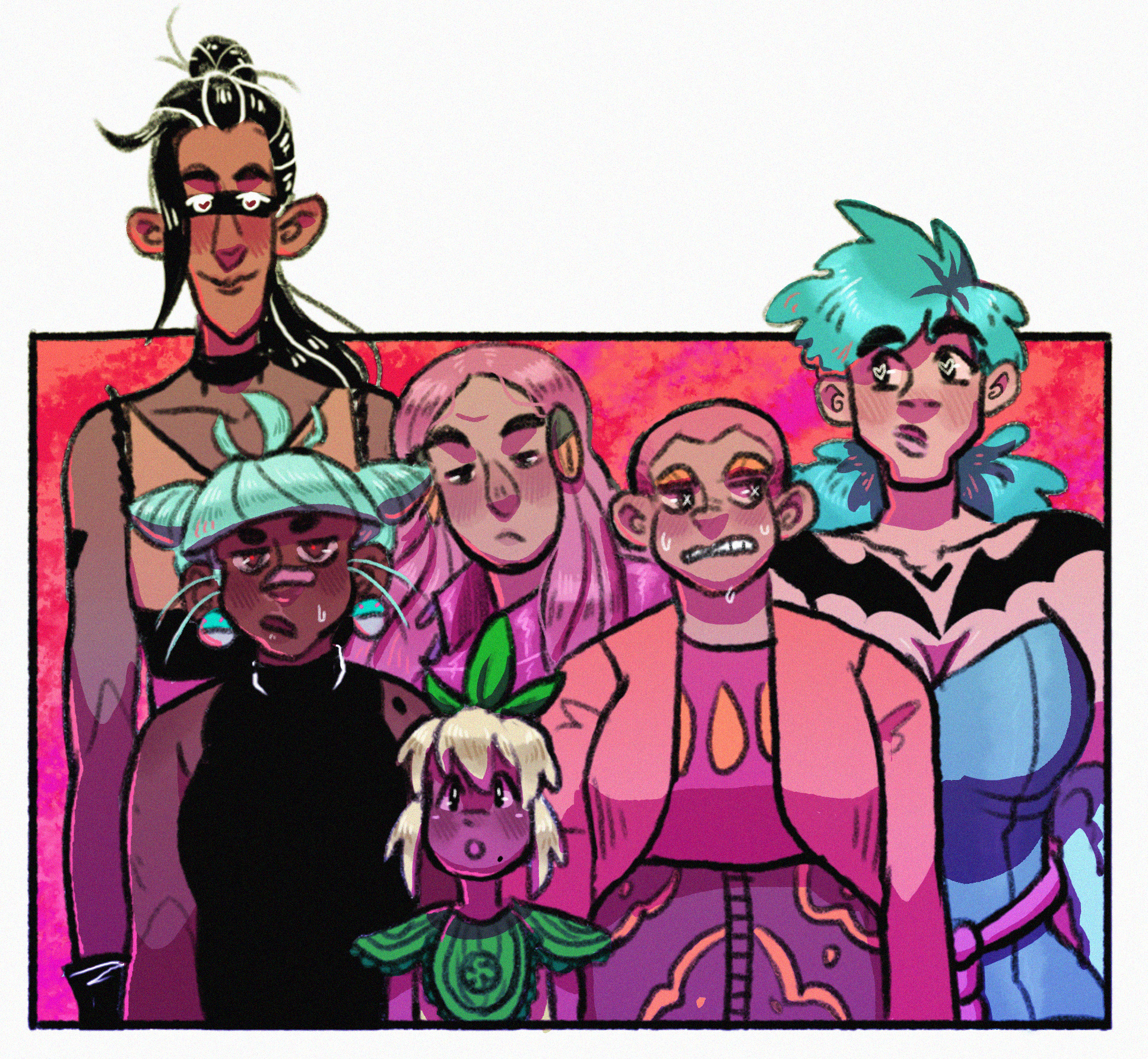 Thank you all for reading my first official feature! If there's a run out there you think deserves a spotlight, you're always welcome to shoot a message to anyone on the Feature Team. Or, if you'd be interested in writing one yourself, the Feature a Fan Run thread is always open to submissions, complete with a new initiative where each new post is announced on the Official Nuzforums Discord - We may be staff, but we wouldn't be here without the entire community and their contributions, and that goes as much for opinions and feedback on the runs everyone works so hard on as the runs themselves! I'm sure everyone would love to hear about your own favorite runs and why people should check them out; I know I certainly would!

That's all from me! Until next time, I'll see you around!
Reactions: pinkshellos, mizar, bumblebee and 4 others