DrakeX's off the record Nuzlockes

Thread Description
An archive for all the Nuzlockes I did before joining NuzlockeForums, which were all saved in Word/PDF, or for some other reason I didn't bother saving the entire run. 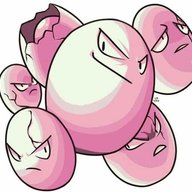 This first entry was done for a Team Omega Weekend Challenge, where the required ruleset was Notepad clause plus whatever torture methods rules you want to add. Essentially, I was not allowed to catch any Pokemon if my team is full, and if I have any deaths, the Pokemon cannot be replaced. This means I can only use six Pokemon throughout the entire run. I kept the rules simple as I wanted to have a chance:
- Dupe Clause (For what it was worth)
- Level Limit (No entering the Gym/League with a 'mon stronger than the Leader's/Champ's ace)
- Switch Mode

I finished my Notepad run of Pokémon Crystal this evening and by just a hair's breath I was victorious over Lance. It cost me my entire team aside my starter, but I did it. I went in with only two Pokémon (my 1st and 6th teammembers), and left with only the first.

Man, this was a ride and a half. I lost Alvida the Raticate right before the 5th Gym due to an Exploding Graveler, lost Linlin the Weepinbell and Cpt. Buggy the Ariados to Jasmine's Steelix and lost Wiper the Noctowl to another Exploding Graveler while leveling him slightly in Victory Road before the E4.

After I lost Wiper, I just decided "To Hell with it", popped enough Rare Candies so that my remaining members Akainu the Typhlosion and Pica the Golem were LvL 50 and 49 respectively and proceeded to hand the E4 its ass with this power couple. Unfortunately the Everlasting Duo was split apart thanks to Lance's Surfing Gyarados claiming Pica's life, thus snapping the last of Akainu's remaining sanity and making him go berserk on the Champ's team.

I'll say it again, this was one hell of a ride. I might just post the battle sometime tomorrow after a night's sleep and tomorrow's work but for now, gaze upon the Champ(s)!

The following entry is the very first Nuzlocke I've ever performed. It'll be very obvious as I feel more time and effort was put in this log along with the amount of deaths. Unova was a bloodthirsty place.

Next up we have my 2nd run ever performed and my first and only recorded failed one. After losing half my team to the Kimono Girls right before the E4, I just couldn't find it in myself to grind any replacements. Not in Johto of all places.

In our fourth entry we have the third run that I've performed, and my second successful one. This was right after my failed one, so I don't really count this as a true success. I feel that if you replay the same game immediately after a loss you're slightly cheating, as you still remember most of the trainer battles and thus can be a bit too prepared. I continued playing after the E4 for a bit, but after a while I just couldn't be bothered. I became the Champ, and I wanted to move on to another game.

I have very special memories of this run, especially the E4 battles. I lost two of my Pokémon to BS reasons (a Counter and Destiny Bond) but it also solidified Nidoking as my favourite Pokémon. It was already a strong contestant due to being Ground/Poison, my two favourite types, but when he OHKO'd all three of Lance's Dragonites with an Avalanche, that just made it official.

Next up is my second run of Pokémon Moon. After having completed my first Blind Run of Moon, I found the second run quite a bore and a hassle to get through. There was just sooooo much plot and cutscenes that kept getting in the way. Not to mention how the call for helps were a total pain in the ass. The fact I didn't even bother keeping track of my graveyard, shows how much of a hassle I found this. But hey, at least this isn't Kalos as I've yet to complete a second completed run of that region after the initial one.

Once more, I attempted to play a bit further and embrace the whole 'First Champion' thing but after a while I couldn't be bothered anymore. Kukui was responsible for all three deaths in my team, and for those wondering why I have a Magneton instead of Magnezone I felt that an Eviolite Magneton was better.

Lastly, for now at least, we have my latest completed run of Pokémon AlphaSapphire. This one took quite a bit longer than the other games because I got bored mid-game and thus left it alone for a couple of weeks. Even after I picked it back up, I took my time and only played about an hour a day rather than binge playing it. Even to this day I'm salty about losing Swampert to Archie's Mega Evolved Sharpedo (I refused to Mega Evolve any of my Pokémon for some extra challenge) along with losing Breloom in the final battle to Steven's Cradily.